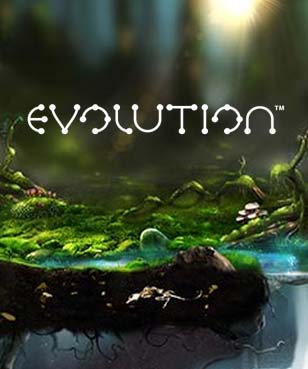 Evolution will actually make you wonder in amazement at the thought that went into the narrative of the game; Our Evolution. This slot will encapsulate and give you joy just by playing; winning is a bonus.

As you know, we came from a single cell amoeba swimming about in the water, and launching into Evolution means taking a deep dive into the ocean. Evolution has a bit of an undulating upside-down atmosphere; the reel actually spins upwards which is cool and unusual.

The game is very immersive (forgive the pun). Meaning, it’s very engaging, you can lose yourself in the “biological life forms light show” as they dance and explode in a cacophony of colours as you get winning lines.

What does it cost to play?

The “Free Spin”, the “Wild” and 10, are inside a bubble, and “Scatter” are all written on the screen as you play. Oh! How’s your Latin? Because it will come in handy in recognizing many of the early and primitive life forms. Who’d have guessed that a slot game could improve your Latin? Enjoy!