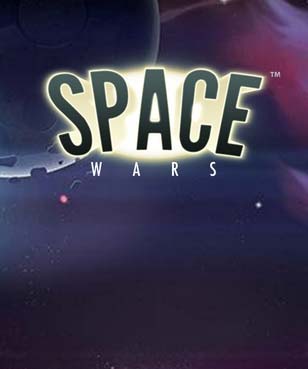 If you’re someone who loves their aliens and sci-fi, and having a flutter on video slot games, you’ll love Space Wars, from the Swedish game developers NetEnt. The backdrop of the game is aliens fighting each other in order to capture a magic crystal. Unsurprisingly, the characters in the game are an assortment of different aliens.

There are many opportunities to win big here, as there are 4 rows and a mammoth 40 fixed bet lines. All 40 lines must be played at the same time. Your coin value must be set first, and this can be done using the coin value meter. This can be set between €0.01 and €0.50. After this, you can decide how many coins you want to stake on each line using the level metre. This can be set between 1 and 10 per line.

After this, you’re ready to launch! You can do this by pushing the circular spin button. If you’re feeling adventurous, you can press max bet to play at the maximum level of 10 coins. Alternatively, if you’re feeling lazy, you can simply press auto-play and set the game to spin as many times as you set it for.

There are several different features in this game. They include Stacked Symbols, Symbol Substituting Wilds, and Cloning Pod Re-Spins. The Stacked Symbols can give you more winnings when they appear. The Wild Symbols will only appear on lines 2 and 4, and if they appear, they will substitute all other symbols to create possible winning bet lines. A Cloning Pod Re-Spin can clone a winning bet line, which in turn generates a re-spin, giving you a chance to win big!

All in all, Space Wars is a great game to play, and it’s not just for the sci-fi buffs out there! The graphics are great, the sound is crisp, and it’s easy and fun to play.